In the past, you only had one choice for skate blades – whatever your skates came with.  Then came the onset of T-blades – those of us who are a bit older remember those unique holders and that classic cutting sound they made with every stride.  Although T-blades never seemed to stick around, new companies bound and determined to innovate on a stagnant area in hockey continue to pop up and try their hand at the skate blade game.  The boys at Bladetech have taken this a step further than simply creating stronger steel from advanced alloys, or coating their blades for sharper edge – They have a patented technology they claim will add up to 5% increase in speed to your skating.  Do they measure up to this claim?  Read on to find out!

Bladetech has incorporated high strength alloys and advanced coatings on top of their proprietary flexible blade technology – the result?  A faster blade for you!

Want to see some of the best pairs of skates to pair with your new Bladetech Hockey Skate blades?  Click here to check our article out!

Bladetech was started in 2013 when Jeff Azzolin, a University of Waterloo engineering student realized that while boots were being drastically improved year over year, the skate blades themselves were being almost completely ignored.  Using his engineering background, he went to work in the lab and discovered there was some unused potential energy in skaters strides that he wanted to take advantage of.  From this innovative train of thought a ‘spring loaded’ blade was created, and Bladetech’s patented ‘Flex-Force’ technology was born.

Since incorporation in 2013, Bladetech hasn’t stopped innovating and has done several improvements on top of their flex-force technology.

One big differentiation that might not be immediately apparent is that the steel they use is 440c stainless steel, compared to competitors who regularly use 410 or 420 SS alloys.  What is the difference?  Well the devil is in the details.  There are countless different types of stainless steels, and the 400 series is characterized as ferritic and martensitic chromium alloys.  Type 440 stainless steel has a higher carbon content than other 400 series, and this allows it to maintain edges better, and also makes it one of the hardest stainless steels.  The 440C steel Bladetech uses is manufactured under a watchful eye in Canada, whereas other steels are mass produced in china and shipped overseas.  440C stainless itself has the highest carbon content 440 series steel, which is why it is it is commonly used in high quality knives.  So what does this mean for you the player?  Less sharpens, better edges, a blade less prone to cracking upon impact, and more consistency to allow you to really hone your skating skills! 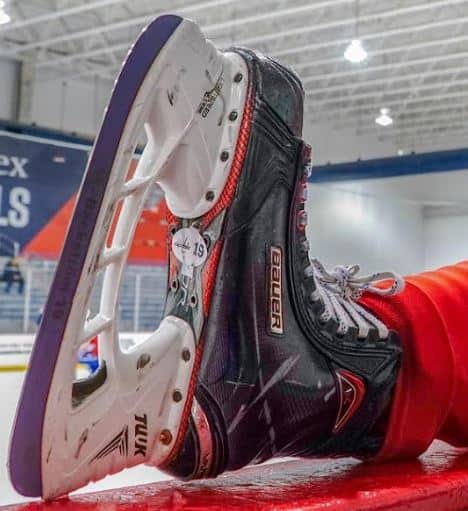 Bladetech has made it easy for you to switch, with blades able to fit Edge, Speedblade XS1, and TRUE holders among many others! 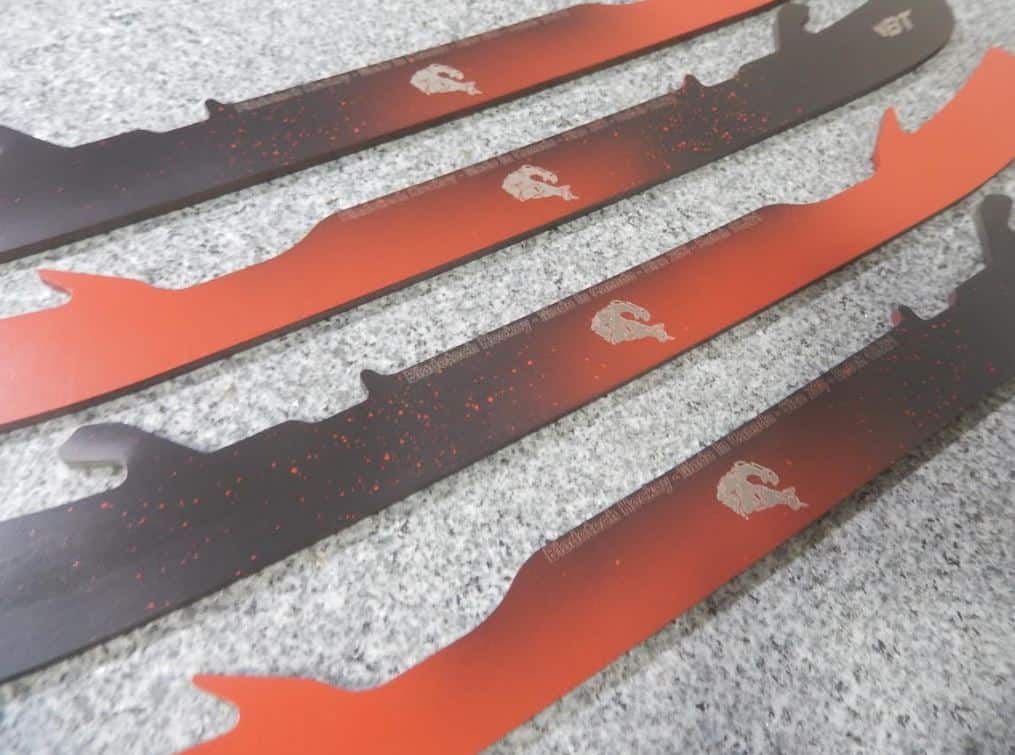 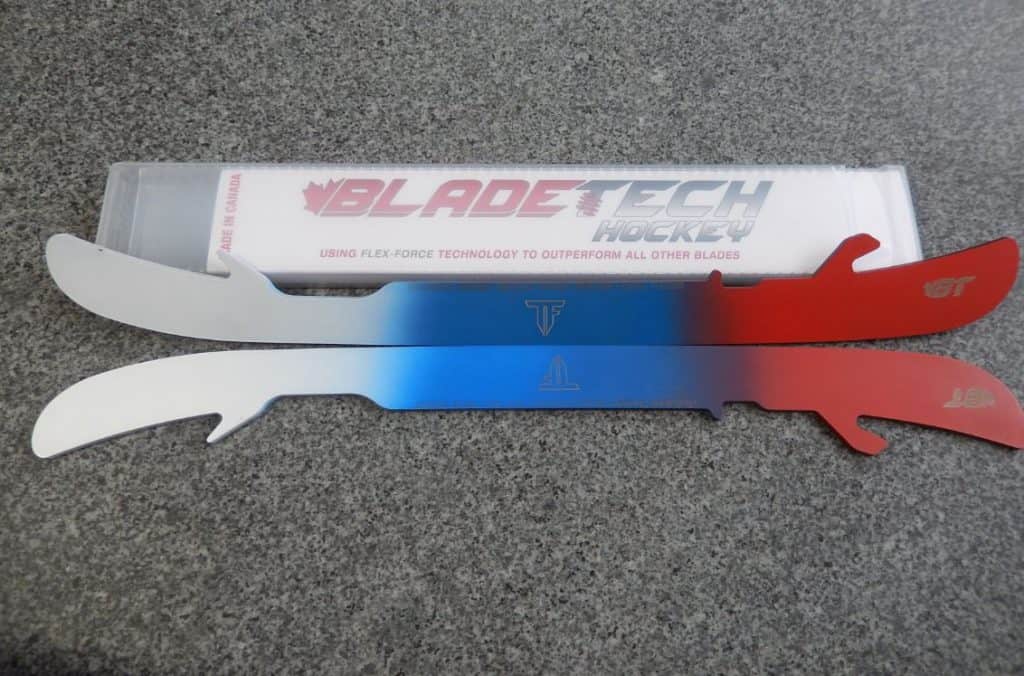 Want some team colors, or just feel like standing out from the crowd?  Not only can bladetech customize with a logo, but near limitless color combinations are available!

Our Research And Findings

Bladetech was gracious enough to send us at Going Bar Down a few sets of blades to take for a whirl.  They sent us one set of their standard stainless steel blades, as well as a set of black steel blades.  As you can see in the picture below, their laser logo etching is seriously top quality and looks amazing!

Despite what we might like to think, we aren’t professional players here at Going Bar Down.  That ship sailed long ago unfortunately!  However, having played hockey at a relatively high level and played for over 30 years, we can speak with some authority on what these blades really feel like on the ice.  We have skated with regular Bauer, Graf, and CCM steel for many years, before more recently trying blades such as StepSteel, Massive, as well as upgraded Bauer and CCM carbon coated blades.

This is probably the part of the article you have been waiting for.  Ryan – Have you noticed a 5% increase in speed and 20% increase in force!?!?!  Well as you can probably imagine I am not a machine and can’t directly quantify small force changes like that.  I can however say that I do feel a bit of an extra spring in my step this year! (pun not intended.. well.. sort of)  For clarification, i’m in my mid 30’s and play in on a pretty typical div 1 and 2 men’s league teams.  I play against lots of players in their early 20’s coming out of junior programs.

Since switching to the Bladetech blades I feel like I can keep my speed up more consistently throughout the game.  When I was younger, speed was the main component of my game, and every year as you age you’ll lose a bit of that.  Since the switch I feel like I’ve gone backwards a few years.  I have a step on d men more often, and later in games as well.

Whether it’s a placebo effect or not – I feel faster since I’ve made the switch.  Whether you’re a weekend Warrior trying to keep up, or a young up and comer trying to make that next echelon of team, from my anecdotal experience these blades deliver.  You can find detailed studies on Bladetech’s website on the actual physics and how they work, and for what it’s worth, on my feet I agree with their studies.

The best part?  You are not paying a premium for Bladetech’s Flex-Force technology.  These blades run about the same price as other premium replacement blades.  With studies to back them up, higher adoption rates all the time in the NHL, and no extra cash out of your pocket, why not stack the deck in your favor when there is really no downside?

Durability in my mind is as or more important than my above mentioned performance gains.  Ask yourself this – is any gained speed worth it if you lose an edge in the middle of the game and can’t use it??  From a durability perspective I believe the Bladetech blades are one of the most durable blades I’ve come across.  I think I am cursed that on walking from dressing room to ice I am 500% more likely than any other individual to step on something that will nick my blade up, or getting tangled up in the corner somehow lose an edge during a battle.  I am currently on my 15th ice time with the Bladetech blades since my last sharpen (I usually get 1/2″ hollow for a combination of glide and bite).  I have one tiny nick in the blade thus far, and have done one pass over each skate with a re-edger (the little Y shaped devices) and I think I can probably still get another 5-10 ice times until I need a sharpening.

Bladetech doesn’t just make Blades for players – They have choices for goalies and sled hockey as well!

For all you tendies out there, you might want an edge in stopping all these players burning down the ice on you.  Bladetech hasn’t forgotten about you, and makes Bladetech Goalie blades for Vertexx holders, retaining that patented Flex Force technology!  The goalie blades are also available in their standard 440C steel, or the coated Black Steel style blades.  As with all Bladetech products, for a small extra fee you can also customize length, color, and logo!  For a touch of personalization, getting your name, number, or logo lasered onto your blade is an awesome addition!

Bladetech also hasn’t forgotten the unreal sport that is Sled Hockey.  For those with a handicap, there’s absolutely no reason you can’t keep tearing it up on the ice, and Bladetech has made sure you can upgrade your sled with the best steel in the game!  Bladetech’s sled hockey blades with G-Force and Ballistic holders, and come with all the aforementioned customization options above.

I love when a grassroots company comes in to disrupt the status quo in hockey.  We’ve seen unbreakable sticks, fully custom skate boots, gloves with swapable palms and so on from the inventors and tinkerers.  I think Bladetech has made an awesome stride in improving blade technology and offers it up at a competitive price to boot.  If you walked into the car dealership to buy a bare bones new car, and they offered to give you a fully loaded one for the same price, what would you say?  I’d be putting my name on the dotted line before they changed their mind!

That’s basically the package Bladetech is offering here.  Premium steel, custom colors and logo etching, and a proprietary speed boosting technology for what the other guys are charging for their skate blades.

If you are in the market for some new steel, we think Bladetech is definitely worth your money.

Let us know if you’ve used a set of Bladetech blades or others, and give us your thoughts below!